CA Agile Central (formerly known as Rally Software) is a collaborative enterprise SaaS platform for agile software development. Within the platform teams plan, prioritize, and track their work. All work item types and artifacts created have their own detail page.

There were 23 detail pages across the platform that had varying tabs dependent on the artifact type, creating inconsistencies. Some of these detail pages were available in a beta version referred to as editable detail pages (EDPs). EDPs were written in a newer, though less performant, tech.

EDPs never reached the retention rate that would move them past the beta stage, and were planned to be rebuilt in a more performant tech. This was an opportunity to revisit both detail pages and EDPs to improve consistency, design, and usability. 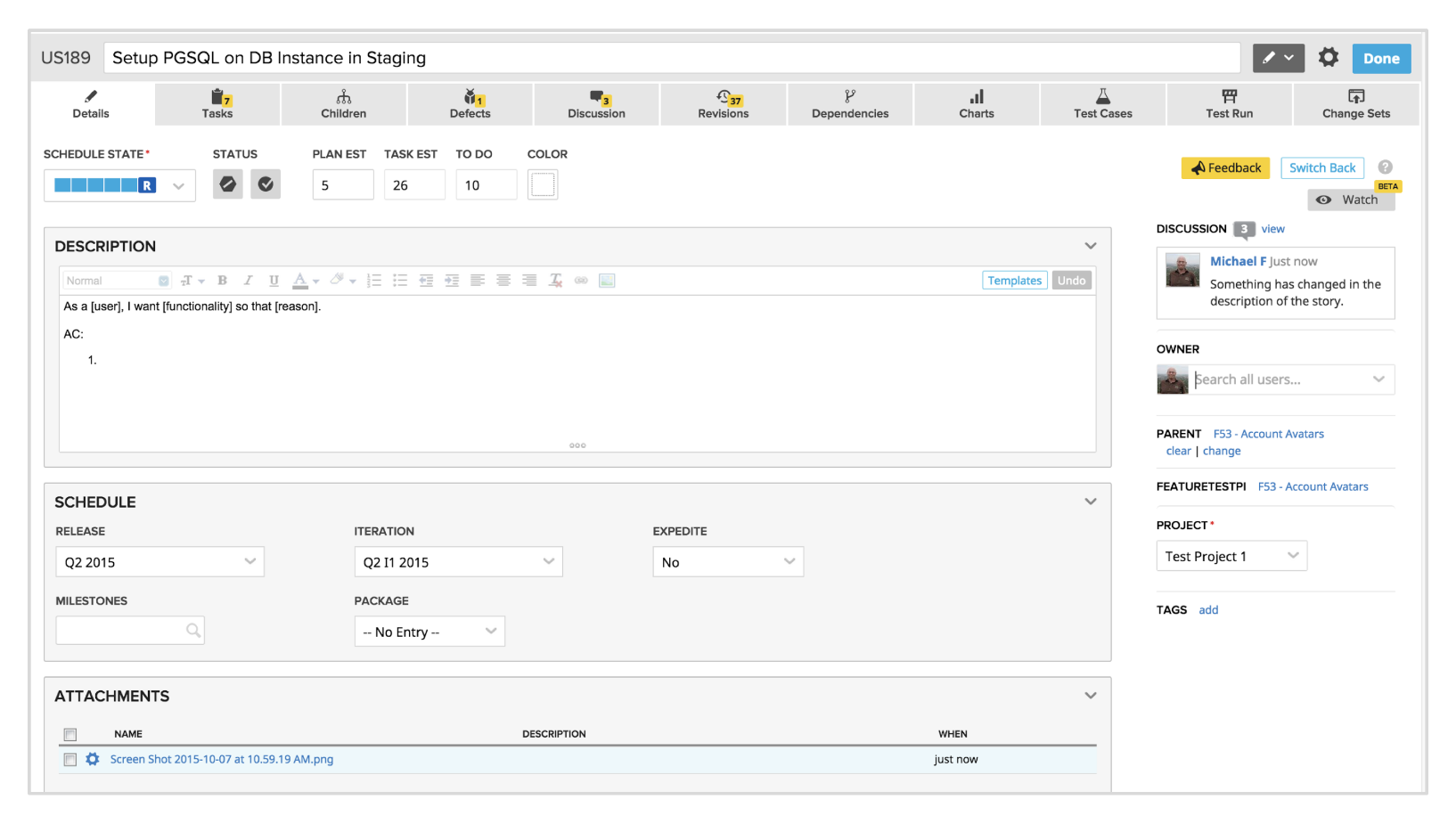 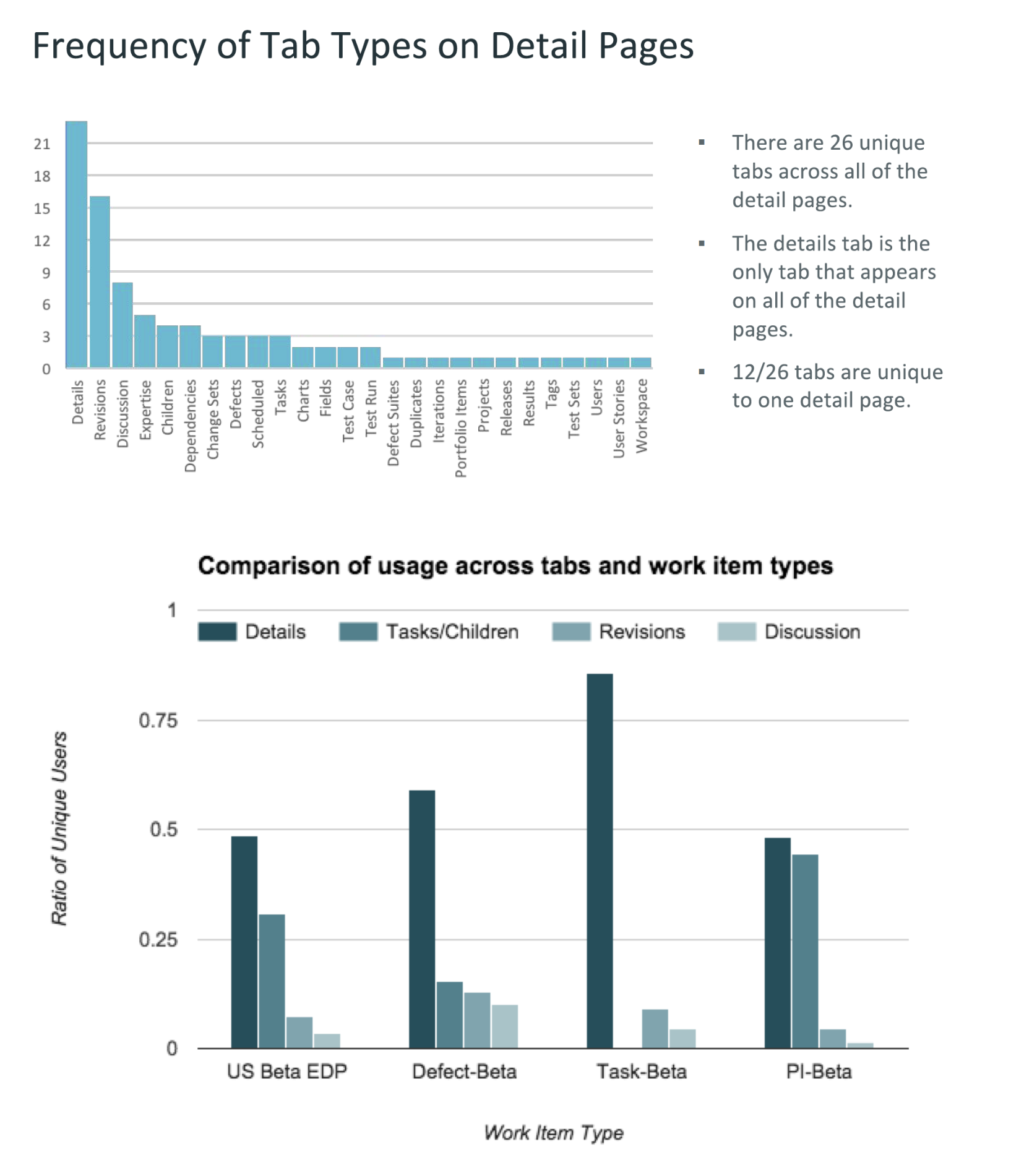 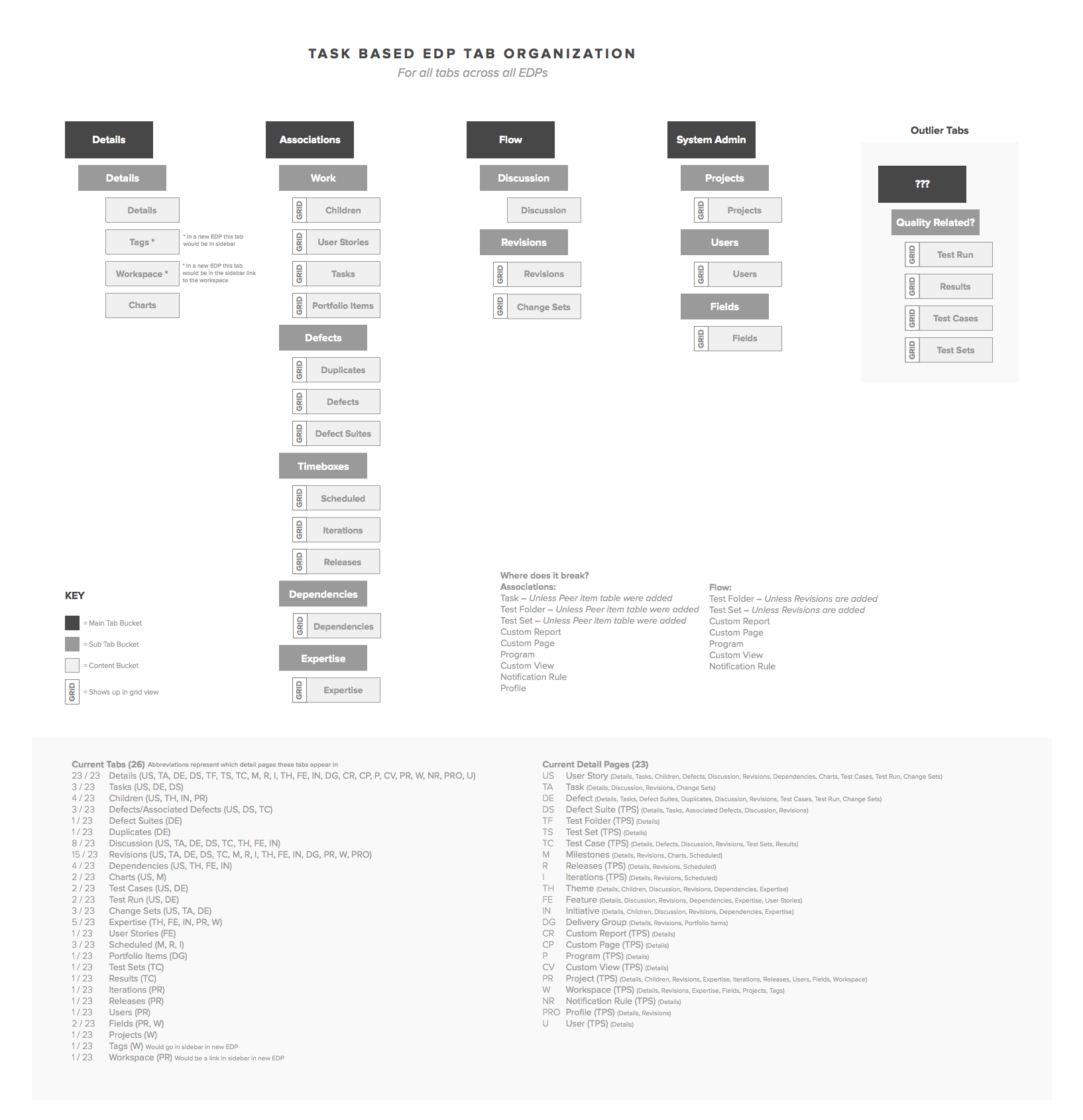 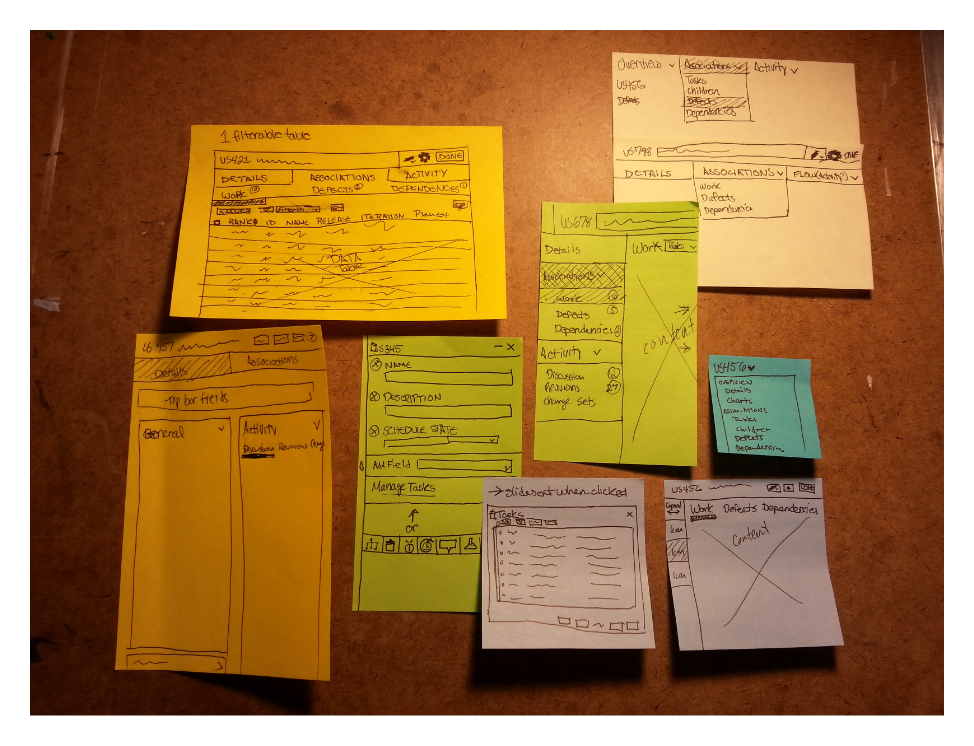 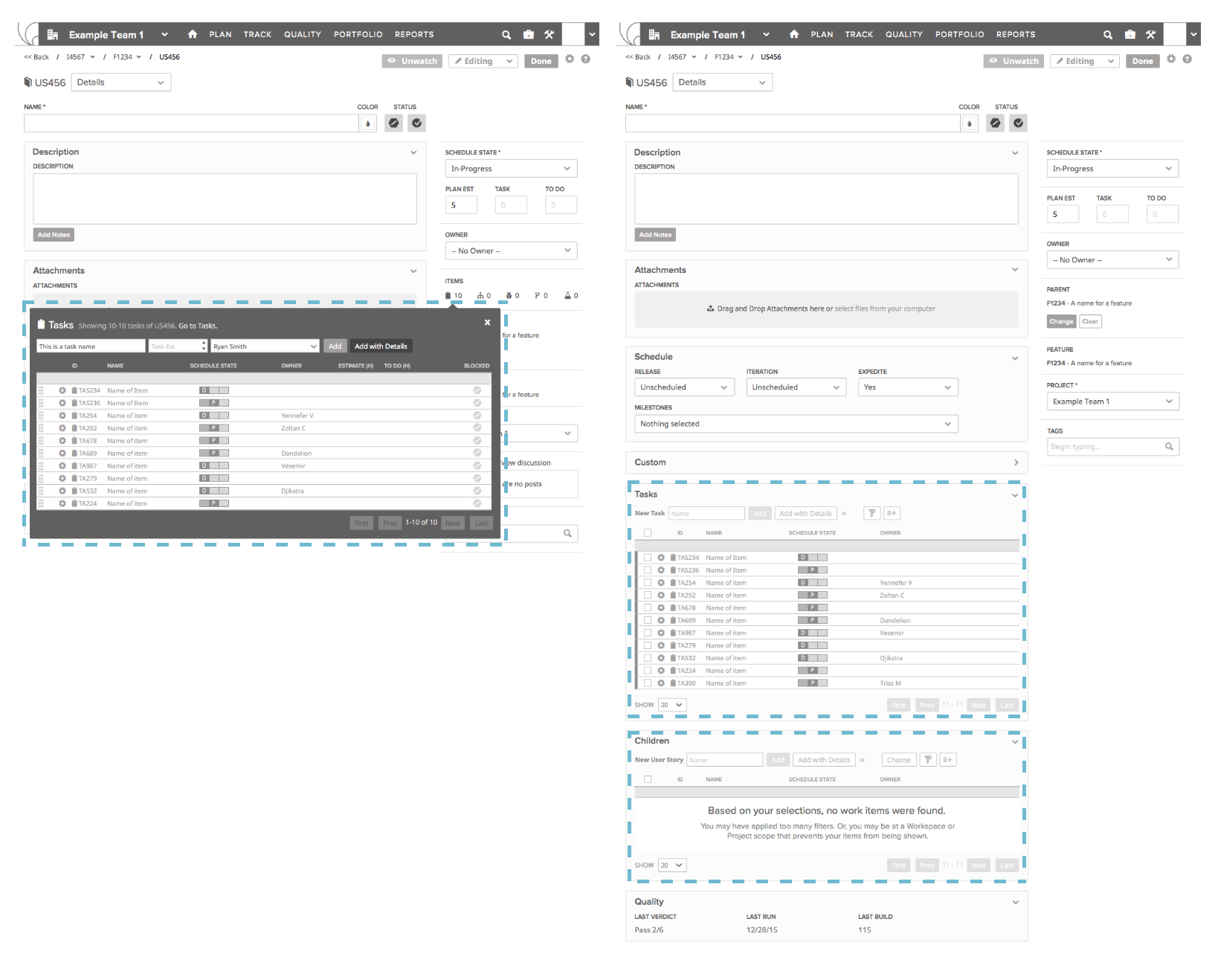 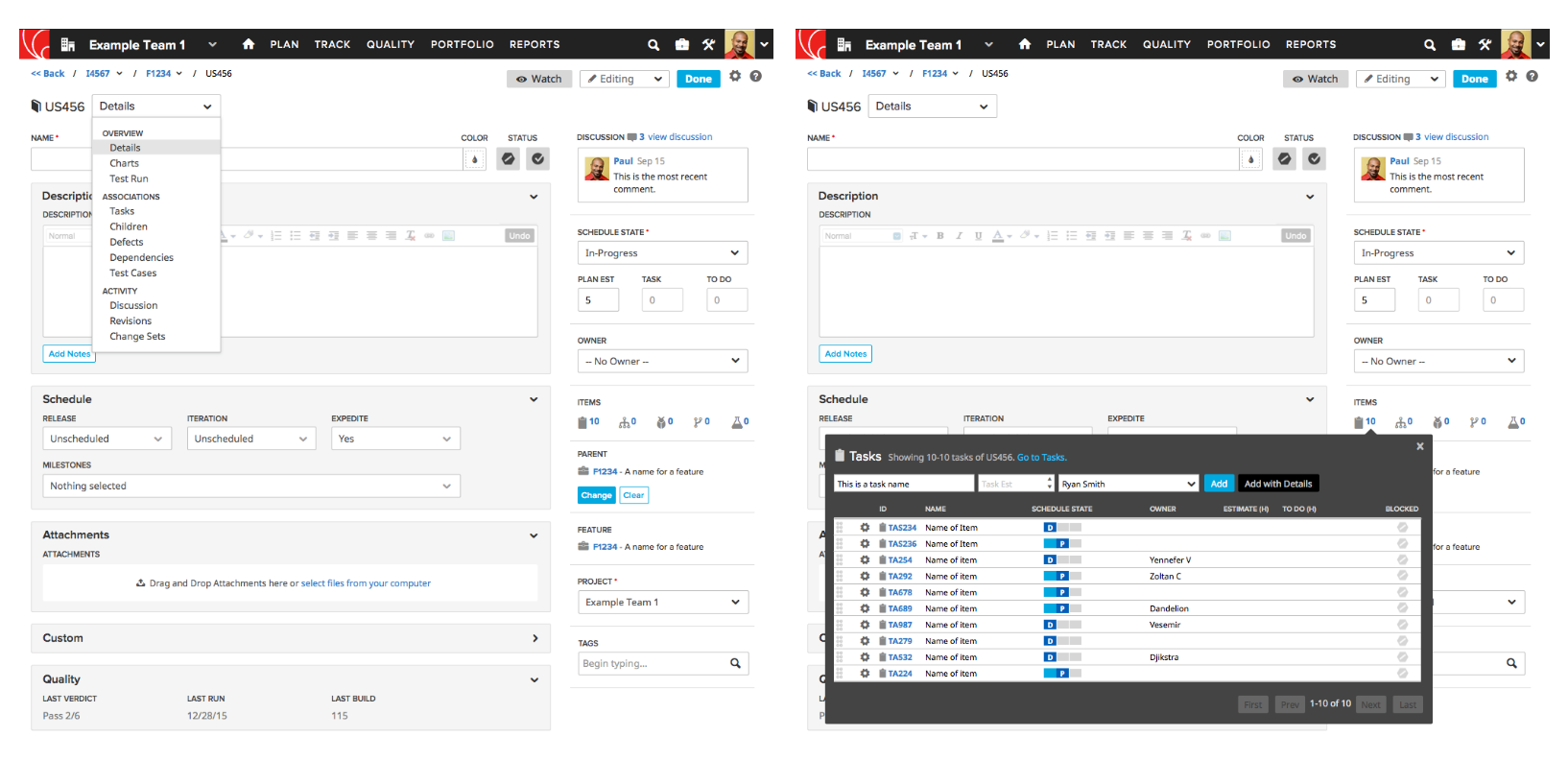 The following were the steps that we took to collect data around all detail pages:

The top takeaways from the collected data were:

Speaking with customers helped us gain more insight around tab and field usage.

The key points around field usage were:

The key points around tab usage were:

The discovery of the abundance of tabs led to setting a goal to eliminate, or at the very least decrease the number of tabs in detail pages. In the interim, the existing tabs would be distributed across a small set of top level tabs that would be consistent across all detail pages. This would significantly minimize the user’s cognitive load. After creating many possible organization schemes, a task based scheme worked best with the type of content.

The task based tab organization scheme was used as a base structure that we built upon through layout sketches. We iterated on feedback given to us by team members and ultimately decided on 2 versions to test.

The first version was a nested navigation in a side menu bar and the other was a dropdown menu style navigation with tabs nested inside categories within the dropdown menu.

We recruited customers and walked them through a series of scenarios with both the side menu bar version and the dropdown menu version.

The top takeaways from testing the side menu bar were:

The top takeaways from testing the dropdown menu were:

There was a push for the team to focus on eliminating tabs and incorporating their content into the main detail view. After iterating on new wireframes and receiving feedback, we decided on 2 wireframe concepts to test.

The first version had task and children data tables in the main detail view, while the other version had icons for associated work items on the right side of the page that spawned popover data tables when clicked.

We recruited more customers and walked them through scenarios with both the popover and the table wireframes.

The top takeaways from testing the popover were:

The top takeaways from testing the table were:

The popover version tested very well with very few revisions needing to be made. Fellow team members used the findings from this study in the following quarter to aid them with future Quick Detail pages work.

Quick Detail pages aimed to make detail pages simpler, customizable, and easier to use. Our research brought visibility to the most used tabs and the complaints that could surface if Quick Detail pages don’t properly accommodate for customer needs.